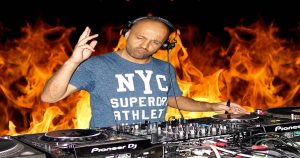 Angus McDonald (Big Mac) originally learnt to mix back in the 1990s and started working in records shops in the north of England. His style and music choice is heavily influenced by this era. In his sets you will find plenty of pianos and vocals with a great uplifting vibe. Through his career, Angus has played events across various cities including Leeds, Bradford, York & Skipton to name some. Angus also played along side other DJs from PCR at the Beatherder Festival in 2017.Angus has been with PCR Since June 2016 and hosts 2 shows on a Thursday evening (Mac’s House & Mac’s Skool). Mac’s House starts each Thursday at 6pm and features Remixes, Mashups and Bootlegs. Mac’s Skool starts here on PCR each Thursday at 7pm and has the best in old skool piano anthems. Along with great tunes, you’ll find an active thread on the Peoples City Radio facebook page when his show is on and you are invited to join in the fun and banter that takes part there!